Technological advancements in portable and wearable systems for real-time collection of physiological data provide new opportunities for computerized diagnostics and quantitative modeling not only in medicine, but also for related applications in sports industry. For example, modern sport watches with ECG-type sensors and similar wearable equipment can be used not only for programming personalized training sessions but also for simultaneous collection of beat-to-beat (RR) time series with accuracy comparable to clinical ECG equipment. Such personal RR data can be used for systematic heart rate variability (HRV) analysis to provide early indication of developing cardiac abnormalities, overtraining detection and for other purposes. Similarly, gait time series collected by smartphones or other wearable sensors can be also used for early detection of overtraining and development of certain abnormalities as well as for rehabilitation monitoring. However, many algorithmic and modeling challenges in such applications remain unresolved, especially for applications where short physiological time series are used. These include instability of pure statistical and machine learning models due to non-stationarity, noise, and data incompleteness as well as ambiguity of the existing analytical indicators.

Similarly, technological advancements constantly increase possibilities for detailed data collection that could be used for effective quantification and predictive monitoring of technical skill level and performance of professional athletes and teams. For example, unlike final game scores or related high-level statistics, intra-game data capturing detailed performance of the team or individual players could be much more responsive to emerging changes in functioning level of individual athletes and teams. Indicators based on such detailed data could provide early warnings of such changes before they translate into consistent trend in actual game scores or equivalent competition results. Robust multi-feature quantitative representation of athletes’ technical skills that is sensitive to small directional changes could be also very useful decision support tool. It can be employed for objective guidance and optimization of the training process as well as for generic comparison of different athletes that could guide in creation of strong-performance team comprised of individuals with complementary technical skills. Despite obvious benefits, the described detailed data remain significantly underutilized in professional sports. Amomg the reasons are significant challenges of discovering accurate and stable quantitative measures using mainstream approaches.

Increasing availability of the detailed intra-game statistics (in addition to the final score) and even more detailed spatio-temporal data capturing unique style and technical skills of individial athletes creates opportunities for sophisticated quantitative modeling with wide range of decision-support applications. For example, standard golf statistics measures the effect of a combination of shots and do not isolate the quality of individual shots. Indeed, if a golfer misses a green and then chips in, the number of putts recorded will be smaller not because of good putting, but because of an exceptional chip shot. Several software applications were created to capture and store golfer shot data and to quantify differences in shot patterns between players of different skill levels. Individual golfers can be measured relative to a benchmark to assess relative accuracy and to suggest whether to focus on increasing distance or decreasing directional errors. For amateur golfers, distance errors on short game and sand shots are shown to be about three times larger than direction errors. Similar approaches can be useful in other sports with measurable technical skills.

However, technical skill measures based on single statistical indicators could often demonstrate low accuracy and instability due to data noise and inherent non-stationarity. More importantly, any two athelets with comparable overall performance, could have quite different skill profiles. For example, the less developed particular skill could be compensated by outstanding ability in other skill category and vice versa. Therefore, realistic skill profile capable of capturing slow-developing and emerging changes as well as individual styles and differences should be based on multi-feature metrics. AQSCS multi-expert framework can be effectively used to discover such multi-feature measures and indicators. One of the possible approaches proved effective in other domains (e.g., biomedical and quantitative finance) is boosting-based discovery of the ensemble classifier which differenciates between players of two clearly different skill levels (e.g., amater and professionals). Base classifiers in such ensemble can be based on typical individual skill measures. Afterwards, high-dimensional ensemble vector with implicit encoding of skill levels and style variations can be used as multi-feature skill metrics in accordance with “ensemble decomposition learning” (EDL) approach pioneered by AQSCS team. The same multi-expert framework can be also applied to intra-game data for early prediction of emerging change in performance that can provide valuable information for coaches and used in sport-betting strategies.

Importance of systematic and objective psycho-physiological monitoring of athletes in professional sport constantly increases. Express medical diagnostics of emerging cardiac abnormalities, early detection of overtraining and similar negative changes in psycho-physiological state of athletes critically depend on the quality of such monitoring. Related challenging problem without existing universal solution is robust identification of the individual zones of optimal functioning (IZOF). Tuning an athlete into his/her own IZOF could dramatically improve stability of his/her performance and increase probability of the highest achievements. However, it is difficult to quantify such optimal zones.

AQSCS team has demonstrated that many of the existing modeling challenges could be overcome by combining complementary physiological indicators using boosting-like ensemble learning methods. It is possible to discover multi-component meta-models with acceptable accuracy and stability even when short time series (~ several minutes) are used. For example, we have shown that application of boosting can significantly increase detection rate of such cardiac abnormalities as congestive heart failure (CHF), different types of arrhythmia, paroxysmal atrial fibrillation (PAF), and their combinations. These meta-indicators could be very useful for express diagnostics of athletes from short segments of RR data. For example, hypertrophic cardiomyopathy (HCM) is hard-to-detect cardiac disease that is a leading cause of sudden death in young athletes. Although different in nature, HCM shares common diagnostics features with CHF and is often accompanied by arrhythmias. Therefore, indicators capable of robust detection of CHF and arrhythmias may provide early warning signs of developing HCM. Similarly, AQSCS multi-expert gait indicators can be used for early detection of developing neurological abnormalities.

Probability-like aggregated output and internal structure of AQSCS multi-component indicators could also be used for the more subtle quantification of psycho-physiological states including rare states. For example, HRV-based and gait indicators may offer fast and convenient detection of overtraining. This approach could provide an alternative for much less convenient and time-consuming psycho-physiological evaluations of overtraining currently adopted. However, individual HRV and gait measures could often produce ambiguous results in practice. In contrast, quantification based on AQSCS meta-indicators could offer much more stable and practical solution. Moreover, AQSCS framework can be also used for detection and quantification of optimal psycho-physiological states. The concept of IZOF introduced in sport psychology revealed multi-featured (multi-dimensional) nature of personal psycho-physiological states associated with the best performance. Therefore, while it is difficult to quantify such optimal zones using existing approaches, multi-component representation offered by our framework could be well-suited for this task.

Individual AQSCS solutions targeted for professional sport applications can be easily combined into integrated and adjustable decision support system for athletes and coaches.

EARLY DETECTION OF OVERTRAINING AND MONITORING OF REHABILITATION PROGRESS 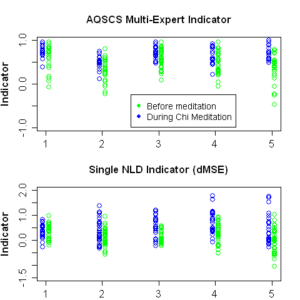 AQSCS multi-expert measures could effectively detect emerging/subtle as well as short-lived and intermittent changes of the physiological state. This capability is illustrated in the above figure, where physilogical states before and during Chi meditation are quantified by AQSCS multi-expert indicator (upper panel) and by single NLD measure (lower panel). For each subject, indicators are computed on several 256-beat RR segments. AQSCS meta-measure clearly shows the difference between “before” and “during” meditation states. On the other hand, single indicator values are significantly overlaping, making such distinction between two states much less obvious.

AQSCS multi-expert indicators can also be used for early detection of the developing neurological abnormalities and other subtle changes from gait time series. Such data could be collected even without special equipment, just using accelerometer available in any smartphone. Similar to multi-expert indicators calculated from heart rate (RR) data, gait-based indicators could be convenietly used for early detection of overtarining and rehabilitation monitoring in professional sport.

For illustration of capability of AQSCS indicators to detect subtle, emerging changes from gait time series, we use gait maturation database from www.physionet.org. Gait maturation database is a collection of gait time series from 50 children of various age groups: from 3 to 14 years old. It is known that in very young children, immature control of posture and gait results in unsteady locomotion. In children about 3 years old, gait appears relatively mature. However, as it was suggested that the dynamics of walking changes continues beyond this age.

It is interesting to compare capabilities of the best single indicator and AQSCS multi-complexity measure in detecting slow changes in gait maturation. phase. Figure on the left (click to enlarge) demonstrates that single indicator is not capable to detect any clear trend in gait dynamics evolution as children age increases. 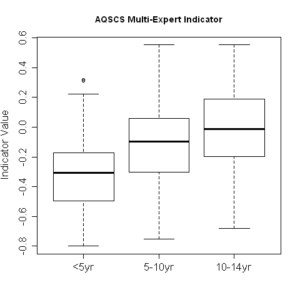 On the other hand, as evident from figure on the left (click to enlarge), aggregated output of the AQSCS multi-complexity ensemble indicator shows clear trend towards gait dynamics of healthy adults as age increases. Remember that the range of probability-like output is between -1 and +1, with healthy state corresponding to positive numbers. Therefore, aggregated output of multicomplexity ensemble measures could be a promising metrics for early detection of subtle and/or slow changes in gait dynamics. 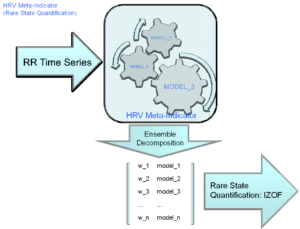 Challenging problem without existing universal solution is robust identification of the individual zones of optimal functioning (IZOF). Tuning an athlete into his/her own IZOF could dramatically improve stability of his/her performance and increase probability of the highest achievements. However, it is difficult to quantify such optimal zones. Modern sport watches with ECG-type sensors and similar sensors working with smart phones can be used not only for programming personalized training sessions but also for simultaneous collection of beat-to-beat (RR) data and other time series with accuracy comparable to clinical equipment. However, information extracted from such data by well-known physiological indicators could often be ambiguous and unstable. In contrast, quantification based on AQSCS multi-expert ensemble indicators could offer much more stable and practical solution. The most unique feature of AQSCS multi-expert ensembels is implicit encoding of many subtle physiological regimes and states. Such an ensemble used as as multi-feature vector offers objective quantitative description of rare and optimal psycho-physiological states. The concept of IZOF introduced in sport psychology revealed multi-featured (multi-dimensional) nature of personal psycho-physiological states associated with the best performance.Therefore, while it is difficult to quantify such optimal zones using existing approaches, multi-component representation offered by AQSCS framework could be well-suited for this task.

MONITORING AND EARLY DETECTION OF EMERGING LIFE-THREATENING ABNORMALITIES IN ATHLETES 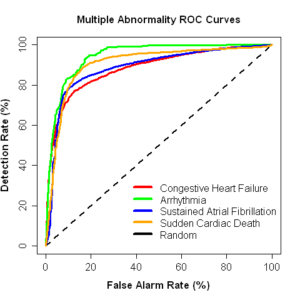 Express diagnostic and monitoring for early signs of serious and life-threatening abnormalities in athletes is very important in professional sport. However, many algorithmic and modeling challenges remain unresolved, especially for applications where short physiological time series are used. Using AQSCS multi-expert framework, it is possible to discover multi-component meta-models with acceptable accuracy and stability even when short time series (~ several minutes) are used. AQSCS multi-expert meta-indicators are universal in nature. Such multi-expert indicators are capable of detecting a wide range of different cardiac abnormalities as well as conditions with complex combination of different pathologies. ROC curves for one of such meta-indicators (in the figure on the left) demonstrate such universal capabilities. It is clear that for the acceptable false alarm rates (<20%), detection rates for a number of cardiac pathologies and complex abnormal conditions could be in the range of 80-100%. Presented AQSCS meta-indicator is calculated on short, 256-beat, RR time series. 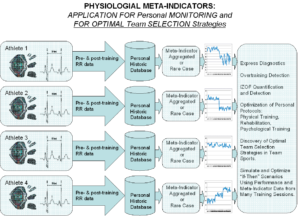